You are at:Home»In the News»Grafton Street refurb cost €400k before work began

The overall project is set to cost the taxpayer €4million and the repaving, which will take place in five stages, is due to be completed by November 2014.

The cost will also include €350,000 budgeted for  public lighting which will be installed on the street in the coming years.

The figures  released to independent city councillor Mannix Flynn at a recent council meeting give scant detail on how the local authority spent  €400,000 so far on the project.

In a response to Flynn, the City Council said the spending related to “investigative surveys” carried out prior to the commencement of construction work, along with design and administrative costs associated with the project.

Flynn said he believed there was a reluctance among officials to give a clear picture of how the money was being spent.

“They present these desires to these jobs but they never give us the details of how the project will be budgeted,” he told TheJournal.ie.

“It usually gets swept away by the fact people want it to happen.”

I think you need far more public scrutiny on things like this and far more transparency from the outset of these situations.

“No one is saying these things shouldn’t go ahead and we should all sit in dilapidated streets but we should be prudent because the boom years of money sloshing all over the place are finished.”

Flynn was critical of City Council officials last month when costs for the Grafton Street makeover seemed to increase by €1.5million at the last minute. 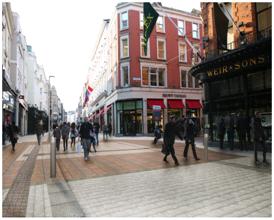 Grafton Street will be repaved  in a natural stone granite and the central carriageway will be in an Iberian granite silver grey with a bluish hue, according to the City Council.

There will also be a square panel of Iberian granite light pink with a darker border at the intersections with the side streets.

The Grafton Street Improvement project is the first makeover of the busy shopping street since the late eighties.

KN Networks – an Irish company with offices in Dublin, Belfast and London – won the lucrative €2.9million contract to repave the street.

Dublin City Council last night did not respond to requests for comment but said they would prepare a statement later today. Source: The Journal.ie