You are at:Home»In the News»BAM UK wins race for £300m Google London HQ

BAM Construct has been named preferred bidder for a £300m contract to build a new HQ for internet giant Google in London.

According to information specialist Glenigan, the firm fought off rivals Skanska and Carillion in the closely contested bid race for the prized King’s Cross Goods Yard job.

A three-year construction programme to deliver up to 1m sq ft of offices is set to get underway in October.

BAM was a early frontrunner to take the project at King’s Cross because it is already working on a three major projects worth £100m next to the Google site.

Working for over three years on the King’s regeneration site it formed a strong working relationship with developer Argent.

The bid team were told on Friday that they were in line for the job to deliver the office complex, located next to King’s Cross station’s western concourse. 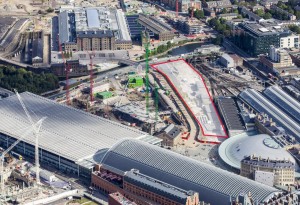 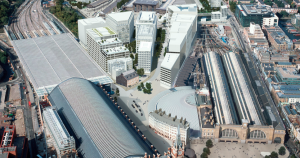 Architects Allford Hall Monaghan Morris is designing Google’s offices, which will consist of five buildings ranging in height from eight to 11 storeys. It is understood the aim is to strive for BREEAM Outsanding rating. The office space will sit above shops, cafes and restaurants.

Davis Langdon is acting as cost consultants on the project, where the winning bidder will be named in six weeks.